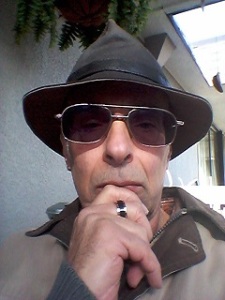 Graham Harman is the third of the three “New Realists”, a group that consists also of Maurizio Ferraris and Quentin Meillassoux. The links will take you to their individual reviews. Each differs from the others in significant ways. What they seem to have in common are roots in continental antirealism and yet discover that they can say something positive, something we can know, about the world beyond the horizon of human experience. Meillassoux and Harman claim to be doing speculation (hence “speculative realism”) and not metaphysics, but their speculations are clearly on metaphysical themes. Of the three, Ferraris is the most straightforward and commonsensical (hence his “commonsense realism”).

In “Personal Agency” (2006) E. J. Lowe anticipates Harman. For Lowe all cause is “agent cause” though not all agents are animate. Humans and animals are agents of course, but so are rocks, hurricanes, and fires. Agent-cause seems to be an entailment of Harman’s Object Oriented Ontology, an entailment he alludes to in the first book reviewed below. He says that causal efficacy is associated in the end with being itself, that it is the being that withdraws from us, the being of the object that interacts causally with other being, other objects. This seems to me not only compatible with Lowe but provides speculative metaphysical support for it.

Harman is one of a small school of contemporary philosophers (including Meillassoux and Ferraris) who are both continentals (in Harman’s case in style only as he is an American) and broadly consider themselves “realists”, something out of fashion in continental philosophy since Kant. But despite this loose grouping into a “new realist” school, all three of these philosophers are very different. Harman calls his own variation “Object Oriented Ontology” and this book traces the evolution of Harman’s thought into OOO from 1997 as an expert Heidegger interpreter to a brief statement of his thought on the subject in 2009, the date of the last essay in the book.

The book is therefore mostly of historical interest as concerns the development of OOO from Hurserl’s phenomenology, Heidegger’s tool-being, and Whitehead’s process philosophy to a full fledged metaphysics of objects. While we see this thought-development in action here we never get more than pieces of the fully fleshed out OOO even in the last essays of the book. Essentially Harman states his position not in a positive way for itself, but as contrasted with contemporaries (like DeLanda, Deleuze, and Latour). The book makes clear the contributions of this lineage to Harman’s own thought (especially the “assemblage theory” of Latour and DeLanda) and I suppose that is its purpose after all. For me, Harman’s OOO seems like more of a starting point than a finished ontological system, but then as noted above, Harman never does give us a fully elaborated ontology in this book. All in all the whole text strikes me as an answer to the question “why do ontology” rather than the ontology itself.

As E. J. Lowe pointed out in “The Possibility of Metaphysics” and “The Four Category Ontology”, a good ontology can help to clarify the margins of scientific investigation and contextualize the relation between mind and matter, goals also embedded in Harman’s OOO. But while ostensibly “realist” in outcome, Harman’s style (like Meillassoux but unlike Ferraris) is continental antirealist demonstrated by his distinction between “objects” and “intentional objects”. “Speculative realism” is, after all, antirealism speculating about “the real” within and beyond the horizon of experience. But again, perhaps this distinction is only another way-station in the evolution of Harman’s thought.

If you are a Harman fan you should read this book. If you are looking for a concise statement of Object Oriented Ontology there might be a better Harman book or paper out there.

Immaterialism is a better read than Harman’s “Toward Speculative Realism” which I also reviewed. My own interest in Harman is the result of his inclusion in the “New Realist” school, though all three of its core members (Harman, Ferraris, and Meillassoux) hold very different positions. This book is a clearer though yet only skeletal summary of Harman’s “Object Oriented Ontology”. Harman claims not to be a materialist but an immaterialist. If this suggests a view peculiar to Harman, it is.

The book begins with a summary of Object Oriented Ontology in comparison to the earlier “Assemblage Network Theory” of Latour from which Harman evolved it. The book’s second-to-last chapter also comes back to the relation between ANT and OOO. In his last chapter, Harman lists 15 characteristics or principles of OOO. I would like to know if and where he has supported the development of OOO in some more formal way, but as yet I find only statements of its conclusions.

The core of this little book, a somewhat strange choice here though there is method in Harman’s madness, is the history of a corporate entity, the Dutch East India Trading Company shortened, in the book, to its Dutch initials VOC. In OOO everything is an object. Rocks, stars, and individual animals are objects as are chairs and statues, ideas, and also the atoms of which all of these are composed. Parenthetically, like a few other philosophers I’ve read recently, Harman is strangely sloppy with scientific allusions stating repeatedly that “hydrogen is produced in stellar fusion” for example. But back to objects, we also have such things as societies, economies, clubs, along with more fleeting entities like the meeting of a particular board of directors on a certain day. Everything that can be conceived as having any sort of unifying principle (recognized by mind as a “joint in the world” — my interpretation, Harman does not use this phrase though it seems to fit), however enduring or fleeting in time, is an object and all objects are equally real, though not all equally important.

The unequal importance idea is one place Harman’s OOO gets into trouble. Since everything is equally real there isn’t any objective purchase for a hierarchy of importance other than the human/world divide Harman aims to flatten out! OOO wants to reintroduce being to philosophical respectability. We cannot “know being” directly, or for that matter even indirectly, and Harman admits that it is a posit for the sake of understanding, that is making more coherent, what we can know, qualities and properties through which we (also objects) experience. Objects (even inanimate objects), similarly experience us. This is not taken to mean “psychically” in the case of inanimate objects, and the significance of the encounter is not (though it can be) symmetrical. If, skiing, I run into a big tree, the impact has little effect on the tree but could dramatically change the course of my life, possibly even ending it. But being that cannot in principle be known cannot be connected up to its qualities (the connection is always mysterious) and so might or might not exist (be real) at all.

In Immaterialism, Harman is at pains to show how OOO works in the social realm and thus the object of his attention is a corporation, the VOC, technically in business for 193 years from its founding in 1602 to its nationalization in 1795. An amazing history. Such objects obviously have an impact on history, broadly conceived, in every year of their existence, but only some of these impacts rise to awareness in the present day. The same is true of events, and other objects (in the case of the VOC these turn out to be a turning-point document in 1619, the character of certain individuals, and the evolving technology of naval weapons) that impact or redirect this history of the entity. The big events he terms “symbiotic” because while perhaps fleeting objects in themselves (a naval engagement) they end up having a disproportionate effect on the subsequent history of the object under investigation.

Harman traces all of this out through the history of the VOC making the case that the changes which history records presuppose an entity with a being (the VOC) “to which” these things occur and which responds by transforming (over time) in particular ways. What the introduction of being supposedly gives us is the contingency of those transformations. Things happened the way they did, but they need not have happened that way. That there was the potential for something else to have happened seems to be what the “unknowability of the object’s being” gives us. As I’ve said, Harman doesn’t argue for any of this here but only states it and illustrates how it applies to a social construct. The kindest interpretation I can give to Harman here is that the history of a particular social structure gives evidence that there are always latent potentials in a thing that never get realized. Further, beyond potentials, hidden being is not merely hidden because no history ever exposes all its potentials, but because by nature those potentials are infinitely fine, inexhaustible!

My question is does it matter to anything that happens to anything in the universe if OOO is true or false? In OOO, even events are objects and have a being in which their unitarity (as an event) inheres. But exactly the same things happen (qualities interact) and the same infinite latent potentials in objects across time exist whether being itself is real or the object is nothing more than the sum of these. Even if Harman manages, somewhere, to argue properly for OOO, I wonder if it is not something of a Pyrrhic victory. I do not see what accepting it accomplishes; how it enhances our insight into the world of our experience.

3 thoughts on “Review: Two by Harman”