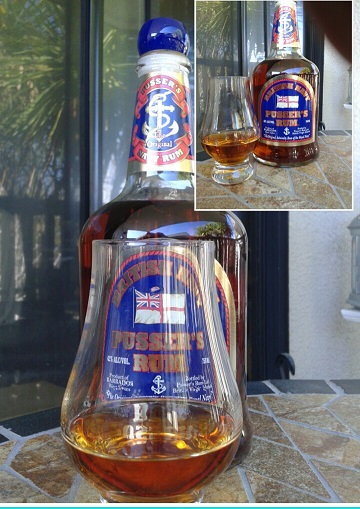 This rum has a real history. The British navy used to issue a “rum ration” to all its sailors starting way back in 1655. Before this the navy issued beer rations and also tried wine and even brandy, but none of these spirits fared well exposed to the temperature variations experienced in different parts of the world. Rum, by contrast, just seemed to get better with time. The ration ended in 1970 (and British sailors held many a mock funeral for it) , but the formula for the rum was preserved and the makers of Pusser’s bought it from the British Admiralty on promise of never disclosing it. There are (I believe) some 7 different Caribbean rums in this blend making it one of the more complexly blended rums around. What the sailors actually drank, at least in the early days of the ration, was distributed at a higher ABV (56%) and tested by pouring a bit on some gunpowder. If the alcohol content of the rum is less than 56% the gunpowder will not ignite, but at 56% and above, the gunpowder burns.

In the glass: Medium amber about half way between my lightest and darkest rums. Nice color. Swirled makes fat legs that start slowly and then speed up as they drift down the glass.

On the nose: If you take a deep whiff when first poured you get a tremendous hit of a sort of vegetal funk that some have called putrid. I am not a scotch drinker, but the aroma suggests to me what a heavily peated scotch smells like, though scotch drinkers tell me its not. But it does smell a bit like old socks or the moldy undergrowth of a wet forest. There is also fruit, apricot, orange and rich caramel, a lot of complexity on the nose. As the rum breaths the funk drops off a bit but it remains the dominant aroma throughout.

In the mouth: One of my creamier rums, but the cream comes along with some fire. At 42% ABV this rum has a little more alcohol than the others I’ve been drinking (although the Pusser’s “Gunpowder” rum at 54.5% ABV is supposed to be available in the U.S. sometime this year and I will certainly try it). It has a little fire going down, but just enough to remind you it’s an alcoholic drink. Sugar content is low, 6g/l according to the measurements.  Note that the rum is listed at 40% ABV on that list, but that is not correct. Overall the rum is thick feeling, perhaps more so than any of my other rums except for the El Dorado  which has a lot more sugar.

Flavor: Funk! Yes that aroma of old socks or wet mold comes through loud and clear in the flavor. I am told by another rum aficionado that this vegetal taste comes from the distillate of a very old fashioned wooden pot-still used in the blend. This flavor rides on top of everything else. The rum is sweet but not very sweet and the funk cuts it anyway. There is molasses in there and brown sugar, caramel, and raisin, maybe some banana too. There are a lot of flavors to tease apart here, but everything starts with the funk.

Pusser’s is one of the world’s great rums thanks to its history and staying power. It is not a rum every rum drinker likes. Either you like the funk or develop a taste for it, or you just won’t like this rum. One reviewer who didn’t like it called it “putrid”. I’ve noticed this same funky note in two other rums, Appleton 12 year and El Dorado 15. It is pretty up-front in the Appleton though not as strong as the Pusser’s while it presents as a background note in the El Dorado. I’m sure there are many other rums, any that have a wooden pot-still component in the blend, that have it too, but I haven’t found them yet or they are too expensive for me to try. That’s the other amazing thing about Pusser’s. At $25 for a 750ml bottle in California it is among the least expensive rums I have, the Barbancourt 5 star and Gosling’s Black Seal being the other two that are really good. Will I buy this rum again? I’m on my 4th bottle now and I’m sure there will be more to come!