Part I. Relative Humidity and Hygrometers 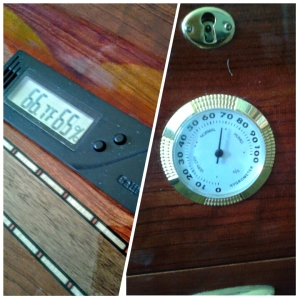 The need for humidification or dehumidification is familiar to all cigar smokers who keep any cigars (perhaps in plastic bags) longer than a few weeks. Cigars smoke and taste best when they have just the right amount of moisture in their leaves. If cigars are too moist they don’t burn right and they can split at the foot when moisture expands in the leaves behind the burning coal. The expanding water swells the tobacco and often splits the wrapper. If cigars are too dry, they smoke too quickly and have little taste other than burning ash.

In part I I’m going to talk about what “relative humidity” (from now on “rh”) is and why we measure it. I’m also going to talk a bit about hygrometers, the tool we use to measure rh.

We live in an ocean of air, and this air can carry in it dissolved water. Water dissolved in air is “water vapor” and is invisible except when we look a long way out to the horizon. Air that is saturated or nearly saturated with water becomes like a very thin fog and obscures objects and colors. When there is little or no water in air we can see detail and vibrant colors to much greater distances.

Air can hold different amounts of water at different temperatures. This chart illustrates the water carrying capacity of air. The chart shows what’s called “absolute humidity”, the actual amount of water in a cubic meter (or foot or yard or inch) of air. As temperature drops, the carrying capacity of air drops too. Air pressure also matters, but the air pressure over the surface of the Earth is so uniform that for most earth-bound purposes it makes a very small difference.

Rh is the percentage of water actually in the air compared to what it could carry. Look at the third chart down. If the temperature is 80F, the chart shows that a thousand cubic feet of air (that would be a 10’x10’x10′ box) can hold 1.6 pounds of water. If that much water were actually dissolved in air of that temperature, that would be 100% relative humidity. The air is carrying as much water as it can possibly dissolve at that temperature. At 60F air can hold only 0.8 pounds of water in a thousand cubic feet. That means that 0.8 pounds of water is 100% relative humidity at 60F.

Cigars have some water mixed up with all the other things within them. There is still water in the cells of the leaf and bound up with all the oils and other things that give the leaf its flavor. Our cigars are best smoked when there is a certain amount of water in them, not too little, and not too much. We can measure the actual content of water in a cigar but it turns out this is a very expensive (costly instrument) thing to do. There is another way. We can take a cigar and weigh it on a very delicate and accurate scale. Then we put the cigar in an oven and dry it until there is no water left. We weigh it again, and the difference between the first and second weighing is the amount of water that was in the cigar. Of course, now the cigar is a dried out unsmokable shadow of its former self, so this technique is out, it destroys our cigars!

But we are lucky. Rh is easy and less expensive to measure and it happens to give a very good indication of cigar conditions. Here’s why. Suppose we take two cigars and put them into two boxes containing air with no water in it. In one box we raise the temperature to 80F and the other to 60F. The water in the cigar in the hotter box will evaporate much faster than will the water in the cigar in the cooler box. To keep the cigars at their optimum moisture will require more water (in pounds or grams) in the hotter box than in the cooler one. It turns out that the water we need in each box happens to be the amount in air holding about 65% of the water it could carry! This works at temperatures from about 60F to 80F. If we find some way of keeping the air in our humidors at around 65% rh there is the right amount of water in the humidor air to keep our cigars healthy at reasonable temperatures.

Hygrometers (pictured above) are what we use to measure rh. We keep them inside our humidors and we can see the rh inside the box when we look at those with outside mounted display or lift the lid to look inside. Of course once you lift the lid the rh in your humidor changes in a few seconds to match the air in your room, but the analog hygrometers change slowly and the digital ones are made to respond slowly and change only every ten seconds giving you time to look at the numbers when you open your humidor. There are two common types of hygrometer, analog (the dial) and digital (the numbers). Cheap analog hygrometers often come with small humidors, either showing on the front or magnetically attached to the inside of the lid. They do work, but they aren’t very accurate. A reading of 65% might be anything between 60% and 70%. There are ways to check these devices and I will get into that in a bit. The only real advantage to analog hygrometers is the “analog look”. They can be art.

The other common type of hygrometer is an inexpensive digital like the one pictured (about $20 on Amazon), and while they may look more accurate, the one in the picture says 65% after all, they are really not much more accurate than the cheap analog ones. That 65% reading tells me the real rh is somewhere between 60% and 70% the same as the analog! You can buy more accurate hygrometers of either type but they are more expensive. For $50 or $60 I believe you can buy digital hygrometers accurate to +/-2%. The most accurate analog hygrometers use boar’s hair as the element that stretches (more humid) or shrinks (drier) to move the dial. They typically cost hundreds of dollars but they are nice works of mechanical art! There are better analog devices in the $100 range. For that price you can get a really good digital, though the “analog look” is really nice!

There is a bright side to the inaccuracy story. Even a cheap hygrometer, although inaccurate, is pretty consistently inaccurate. That means if it reads too low it will read too low all the time. Although the consistency varies with the temperature, within the small range we like to keep our cigars, say 65F to 75F or so, the hygrometers are pretty consistent. So if you know that your hygrometer reads low or high, you can know to about +/-2% what the real rh is. Some hygrometers, digital and analog, have a little set button or wheel that lets you program the rh when you actually know what it is. If the real rh is 75% and the hygrometer reads 71% you can change the hygrometer. But not all hygrometers have this feature, and certainly not the most inexpensive ones. So what do you do?

Take a small bowl (a ramekin is great) and put a few tablespoons of salt in it. Add some water to the salt, just enough to wet it but not dissolve it. If you put your little bowl of wet salt and your hygrometer into a ziplock bag or small air tight tupperware container. In a little while (24 hours is more than enough) the salt/water mix will bring the rh in the container to 75% at any reasonable cigar temperature. Look at the hygrometer (preferably while the bag/container is still sealed). If it reads 72% you know it is always going to be about 3% low. If it says 79%, it’s 4% high. Now you can know, with a little more confidence, the real rh in the humidor. If your hygrometer reads 4% high, a reading of 68% means the real rh is 64%, etc.

So we’ve learned what relative humidity is, why it works to measure it, and how we do that.
Here’s a link to another hygrometer tutorial with pointers to some nice instruments.

In part II I’ll describe some different products I use to keep the rh [near] where I want it!