Back in the days of prohibition in the U.S., the spirits sold in the speakeasies (or maybe from the back of a truck) were frequently watered down. The story goes that one particular rum runner, Bill McCoy, loaded a boat with rum in the Caribbean, and sailed it up to New York where he remained in international waters (the 3 mile limit) and passed his rum on to boats that came out to meet him making I would think a tidy profit in the process. Bill McCoy gained a reputation for moving only honest unadulterated product into the black market channels for distilled spirits. “The real McCoy” became American idiom for “honest whiskey”, and soon after for anything genuine.

The Real McCoy rum series (there is a 3 year, 5 year, and 12 year) is the creation of Bailey Pryor who did a documentary on Bill McCoy and in the process met R. L. Seale of Foursquare rums. The Real McCoy is a result of their collaboration, a “Barbados style” (it says so on the label) rum mixing pot and column still distillates. According to the website (linked here) a good part of the idea was to keep the rum honest. Each of the age statements represent the youngest rum in the standard blended product. It is also made without added sugars or anything else. 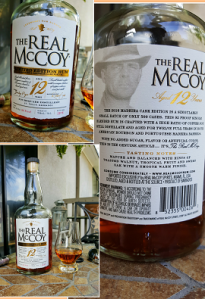 What I have tried, pictured here, is a special “small batch” 2016 release aged in both charred American bourbon, and Portuguese Madeira casks for a full 12 years (total). I assume it is a blend, the label makes no mention of a single barrel. The white label sets it off, bottled at 46% ABV (as compared to 40% for the production blend). The price of this special product is about $50, while the standard blend is about $40. It comes in a nice old fashioned sort of bar bottle, with a plastic-capped cork stopper that gives a satisfying pop when pulled. Let’s get to the rum…

Legs: When you swirl the rum in the glass the tiniest droplets form and take forever to coalesce into very thick drops that run very slowly down the glass.

Aroma: Apricot, burnt sugars (treacle), molasses, raisin, some alcohol, tobacco. As always there seems to be something different in every whiff. Good smells though. Want to keep breathing it in.

Flavors: Very creamy from the beginning. There is the burnt sugar from the nose, but also a distinctly cinnamon note, some chocolate, tobacco, ripe grape, apricot again, and a little touch of oaky bitterness. The finish is long, smooth, and sweet. Some heat comes up but gets spread out over the finish and never burns. Very nice. The Foursquare pedigree is notable in the creaminess and depth of the flavors. Very nice.

For the price ($49) at my retailer this is close to as good as the slightly less expensive ($42) Foursquare Zinfandel and Port cask products. Purely a matter of taste here, I think the Real McCoy is a little more complex perhaps but less cleanly refreshing. In any case it is a very good rum and I know I will have to pick up a bottle of the standard black label 12 year on my next visit to my local retailer so I can review that one too.

The cigar pictured above is a Rodrigo “Corona Project” house blend I reviewed before over here. The rum goes well with every smoke I’ve tried with it. If there’s a little roasted nut or sweet woodiness in the cigar, this rum will bring it out a bit.

Drink up me hearties!

Quine Atal Writer, editor, cook, programmer. I've worn a few hats and had a few adventures. Currently writing philosophy and blogging. Transplanted from the New York City to San Francisco back when that was in style. I tried many things, earning a Masters degree in philosophy (SFSU 1980), but learning to program ultimately determined my living. Marriage had its own effect on that direction.
Published February 17, 2017