It has to be said that I have grown very fond of this rum and mostly because it presents my palate with something different every time I try it. Perhaps that is the bottle itself evolving. I am about 4/5 through my first bottle of this rum now over about 2 months. That isn’t a lot of time for bottle-evolution, but enough, or perhaps my own palate has evolved into appreciating this sort of profile. 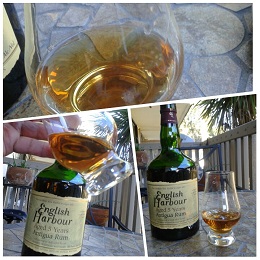 The label says the rum is 5 year old Antiguan. That’s a good age for a rum, a little young of middle age. If this is representative of an “Antiguan style” I look forward to trying other examples. In the glass it is a light amber about like Barbancourt 5 Star (an 8 year-old). Swirled it forms thin legs. On the nose there is alcohol but not as much as in younger rums, and the acetone or varnish notes characteristic of younger rums are present but left in the background. There is apricot, some orange, and banana in the nose. I don’t notice any darker fruit but there is some nice woody sweetness in the background also so the fruit doesn’t overwhelm the nose like the orange does in Pyrat XO for example. 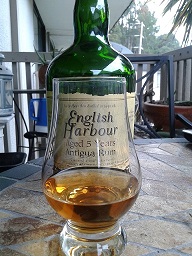 On the tongue, sipped neat from a glencairn glass, it has a glassy crisp feel. Sometimes I detect a minimal creaminess and other times none at all. I get hints of brown sugar, and caramel but not the burnt caramel notes of much darker rums like Mocambo 20. A little fruit, orange and apricot, carry over from the nose. When first sipped, even after sitting out in the air for 10 minutes, there hardly seems to be any flavor at all, but still a detectable brown suger sweetness that goes down easy. The finish, at the beginning a little bitter, seems to vary from short to medium. It lets you know there is some alcohol there. As the glass is sipped the flavors seem to enrich and the rum gets distinctly sweeter and creamier.

One of the things that makes this rum so interesting to me is how it changes from the beginning to the end of the glass. Caramel comes into the flavor, along with a hint of warm spice taste like cinnamon and nutmeg. The creaminess is never very strong but it is detectable. Bitterness disappears from the finish which gets sweeter and longer. What starts out thin with bare hints of flavors becomes rather deeper with flavor hints that come and go with each sip. This is moderately priced rum. It regularly goes for near $40, but can be found around $35. I am struck by how at first sip I wonder if it’s worth that price, but by the end of the glass I know this won’t be my last bottle! 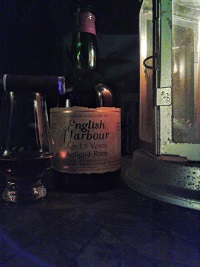 As for cigar pairing, it works well with a Drew Estate Papa’s Fritas and L’Atelier’s la Mission. The nose alone brings out some extra sweetness in these cigars. It isn’t as generally a good pairing as some of my other rums but I haven’t tried it with every cigar I have either. As always, your palate may vary on this and it isn’t bad. Sometimes the cigar affects the rum more than the other way around! Try everything.

My scoring system is simple. Would I buy this rum again for $35-$40 or not? Yes I would. It is both tasty and real without the artificial notes of many other popular sipping rums these days. Good stuff!