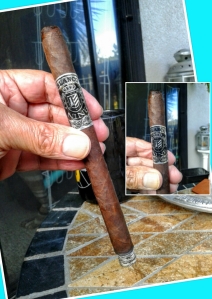 Seeing a review of these (a different vitola) on #iRobusto #mitmcigar a couple of weeks ago (Episode 28. October 18, 2015) I thought I’d give them a try. I bought a box (30 count) of Blanco 9 lanceros for about $6/stick. The cigar is made by Los Blancos of Esteli Nicaragua.

I’ve had two of these now. This one I’m reviewing is paired with orange pekoe (black, unsweetened) tea as I didn’t feel like rum this afternoon. I paired the first one with Mocambo 20, a good rum with lots of cigars but not this one. At least I didn’t notice much about the cigar flavors through the rum. The tea is much better with this stick.

Pre-light: Don’t get much off the foot, but the wrapper (Nicaraguan Corjo) has a heady aroma of fresh hay, flowers and a little barnyard. Very nice! Not much on the cold draw but a little salt

Construction: Very good! Evenly packed, beautiful wrapper, draw excellent on the first, but a little tight for me on the second, burn line requires minor correction a few times (but I’m obsessive), lots of nice smoke, even the stick with the tight draw! These smoke very slow. The first lasted 90 minutes, and the second not quite that long. I had to use my draw tool once about 2″ in on the second stick — tricky with a lancero. The draw got a little too tight and the smoke output dropped. The cigar actually went out. I love how easy it is to relight a lancero though! Was fine through the rest of the smoke.

Taste: The flavors are of sweet wood and cloves, maybe a little cinnamon. There is pepper. Every once in a while I get a hint of earth, and brown sugar behind the wood and the aroma has a hint of pipe tobacco. There’s something like mint in there once in a while too. Moving into the second half of the cigar the sweet wood and baking spices fade back a bit while the mint comes forward, and the pepper remains. Everything is still present but what dominates changes. The cigar retains its flavors at least down to the last inch which is about as far as I can smoke it. The #mitmcigar crew said this was a strong cigar and they’re right! I got dizzy crossing into the last inch of both cigars!

Overall I’d say these are pretty good but not great. There are flavors and I enjoyed them. They even change a bit during the smoke and best of all, there is still something to be tasted down to the last inch. I like the lancero format. If the rest of the sticks turn out like the first (good draw throughout) rather than the second. I’ll enjoy the box at least. Are they worth $6+/stick? I think there are some better sticks around at the price (even below), but that is just my palate. They are at least as good as many cigars available in that price range today that I’ve smoked, so yes, it’s a fair price.