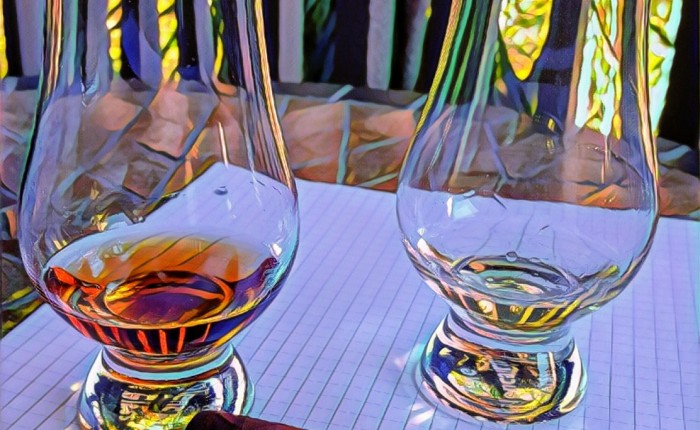 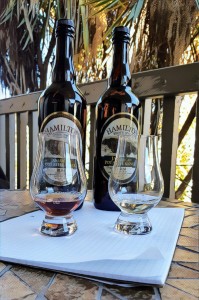 Two more rums from Hamilton, both related to the Pot Still Gold I reviewed previously and one also to the Hamilton St. Lucian rum also reviewed — see links below for these reviews. I include both Black and Blonde in the same review here because while related (both rums start from the same stock) they could not be more different. Price on these is moderate, about $35 U.S. for each 750 ml bottle. 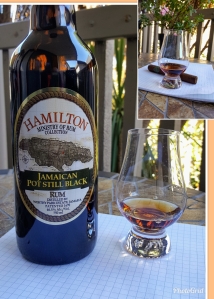 Color: Dark copper reddish. The rum, while not sweetened is colored with what the Ministry of Rum calls a “double strength black sugar-based caramel”.

The label and Ministry of Rum web site says this is a blend of light, very light, and heavy pot still rums aged “up to 5 years”. There is no mention of the sort of barrel (ex bourbon, or something else) used. The feed stock is molasses.

Flavor: raw sugar cane, burnt caramel, black molasses, coffee, tobacco, over-ripe banana and a little sherry-like smokey oak. A bit of fire on a medium and sweet finish,  not bitter. The funk is present but only underneath the sweetness of this rum. This is not a dry rum but distinctly sweet. The funk comes up as a background to the sweetness.

Texture: A little creamy, not very, but there is some body here. Not glassy or crisp or dry. Distinctly brown-sugar or raw sugar sweet.

This rum is delicious and reminds me of the Dos Maderas 5+5 if a more sophisticated (and unsweetened) version of it. Like the Dos Maderas, this is a great cigar pairing rum. I will be buying more of this one! 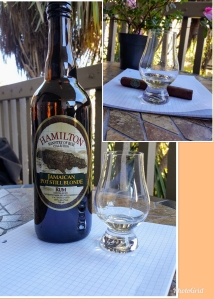 Color: very pale yellow tinge, more pale than the Hamilton Pot Still Gold (barely) but not all the way to clear.

Aroma: Funk of a sort I do not know. Rich rotten pineapple or lychee fruit. There is alcohol on the nose but all of it is overwhelmed by the aroma of rotting fruit which comes out a little like the smell of ether and old airplane glue.

The label and Ministry of Rum website say there is no coloring added to this rum which begins with the same rum stock as the Black (above) and Gold (see review) pot still rums. Then aged 18 months in barrels formerly used for Hamilton’s St. Lucian rum, finally being married for 6 months with a 1-year aged light pot still rum.

Flavor: A watery sort of dryness that fills your mouth with the funk of spoiled grape, way over-ripe pineapple, and lychee fruit. This might be the most awful  funk I’ve ever tasted. Undoubtedly there are some rum aficionados who will relish this, but I’m not one of them. The finish is short and dry but not bitter. There is no dark fruit here, nor coffee or tobacco flavors, nor caramel, molasses, or brown sugar. The over-ripe bright fruit funk dominates everything except the alcohol which is smoothed by the fruits. Possibly the aging in barrels used previously for Hamilton’s St. Lucian, among the funkiest rums I’ve had (see review) explains this strange and unfamiliar kind of funk but yikes, this is way over the top.

Texture: Thin, watery, not creamy. There is body here but it is all in the funk.

Perhaps my taste will evolve or the rum will evolve in the bottle. Right now, having had 3 glasses, I do not much like it at all. 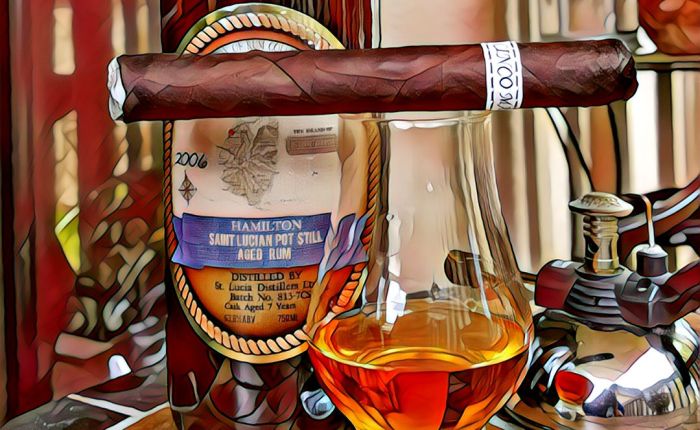 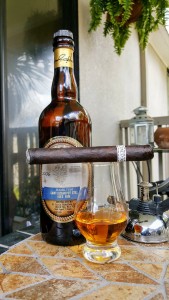 I seem to have missed reviewing this rum and thought I’d better get to it while I yet have some left. Edward Hamilton is a modern adventurer of the old school. He has been everywhere and done a lot. Eventually he found his way to the Carribbean and fell in love with rum, its history, and its making. Sometime later (2006) he started “The Ministry of Rum” website (and then taught himself enough computer coding to make it better). The sight is a fantastic source of rum information. A lot of its categories are inactive. If you look at his “rum of the month” you discover that only two were ever entered, the latest in 2006! But the forums are very active with hundreds of rum and whiskey subjects discussed, and his informational essays (dozens of them) about rum will always remain relevant. There is a lot of education to be had here. Membership, allowing you to participate in the forums, is free.

Edward eventually put together a collection of rums under his own name. Alas this is one of the moribund parts of his website, only 4 of his collection listed and described. There must be nearly a dozen now, but all (I’m not sure of that) limited bottlings some no longer easily found. The nice thing about buying any Hamilton rum is that you know you’re getting something honest, unadulterated, well made, and not on the mass market. His labeling is among the best in the industry. On the front of my bottle it says:

Supposedly you can put that batch number in some field somewhere on his website and find out more about that particular batch, but I have been unable to find that entry point. Perhaps one of my readers here will have better luck. The back label says this:

Back label: Hand selected by Edward Hamilton for the Ministry of Rum collection from the cask aging warehouse at St. Lucia Distillers Ltd for its flavor and authenticity. Distilled from fermented molasses in a Vendome Pot Still, this medium-bodied rum was imported in the cask in which it was aged in St. Lucia.

As I understand it the barrels are imported in New York where they are bottled. Let’s get to the rum. 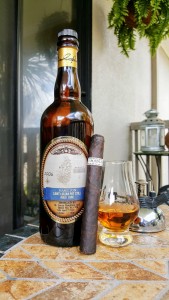 Color: Medium amber, copper a little organge rather than red. The rum in my glass is just slightly cloudy. Mind I opened this particular bottle about 3 months ago and I do not remember the rum being cloudy when it was fresh. I have one more bottle, I’ll try to remember to update this review when I get around to opening it.

Legs: Swirrled it forms the tiniest of droplets at the front of the glass that only slowly coalesce towards the back in thick legs that slowly drop down the glass.

The aromas of this rum are fantastic. Only a little alcohol (interesting considering the almost 64% ABV), no acetone, no “young rum notes”. It smells rich and sweet with ripe but not overripe fruit: apricot, orange, banana, allspice (or something like it), and a noticible “pot still” funk so up front in rums like Pusser’s and Appleton 12.

The flavor strikes me as nothing like the aroma. The contrast is jarring. This rum is not sweet; very dry. I cannot taste any of the fruit I get on the nose. There is burnt brown sugar that isn’t sweet, tobacco, and a meld of oaky smokey (as smokey as rum gets) notes I can’t tell apart but I can tell there is a lot of nuance here I am not qualified to reach. The alcohol makes its presence known. It isn’t in the least harsh, but it comes up across the mouth and down the throat with a medium finish that speaks of oak. The fire stays with you for a bit after the swallow slowly fading. The texture wants to be creamy but the alcohol cuts through the cream. There are lots of contrasts in this rum but they don’t fight, they get along and sum to something interesting and different.

Given the high ABV I had to see what a little water did to the flavor. Turns out not a lot! Adding 5 or 6 drops and then twice that to an ounce brings out a little fruit from the nose but only by a little. I get a little banana, maybe raisin but it’s hard to tell. There is less heat but not by much. All the melded richness, the flavors I can’t separate, is still there, the funk is even a bit stronger. The rum still isn’t sweet, but maybe not quite so dry. Perhaps there is a little less oak bitterness, and the aftertaste gets a little longer.

At around $50/750ml here I’m on the fence with this rum. I have one more bottle to try, but not sure I would buy more even if I can still find it. I think the price is very good given the complexity, depth, and balance of the rum. It is a very good rum if you like this kind of profile. I can enjoy it, and I can appreciate it because to really get in to rum you have to stretch your palate. But it isn’t something I sip and say “wow I love this”. I have to work at it. 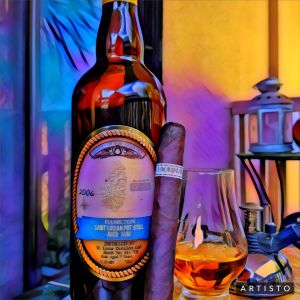 There is a good review of this rum by Inu Akena at his website. Hit the link.

The cigar by the way is a “Cinco Maduro” from Rodrigo Cigars. Medium strength with wrapper, binder, and all the filler blend made from maduro (5 different) leafs if I recall a “lost creation” of Island Jim. Don’t know if there are any of these left but George has a lot of good cigars and frequent discounts. It’s worth getting on his mailing list.