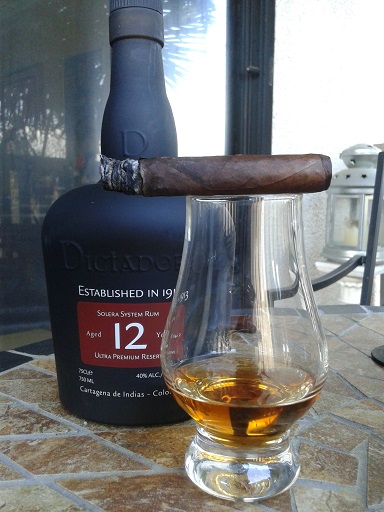 In the glass: Color is a medium amber maybe barely lighter in shade than the Santa Teresa 1796. Indeed there are a lot of comparisons to be made between these two rums. Swirling it generates thin medium fast legs.

Aroma: Only a little alcohol. Lots of caramel, brown sugar, something like a little varnish, but something older there too like some mold or vegetal aroma. If there is fruit in there it is old fruit. After sitting in the glass a few minutes the aroma dies back more fully than the Santa Teresa, but otherwise they are very similar.

In the mouth: Nice and smooth, a medium finish, not bitter. A little heat going down the throat just the way I like it. The rum is a little creamy again very close to the Santa Teresa.

Flavor: This is really why I’m comparing the Dictador 12 to Santa Teresa 1796. They are so similar here! When I first opened the Dictador rum my impression was that of pure milk-caramel, toffee, and brown sugar. But as sweetness goes, even fresh it is not very sweet despite the caramel and sugar flavors. As the bottle breaths a bit these dominant caramel notes settle down and the rum tastes remarkably like the Santa Teresa but a bit less sweet. Sugar tests confirm that this is a very low-sugar rum. Like that other rum, the flavors here seemed squashed together. There is an overall impression but I can’t tease individual flavors out of it.

Cigar Pairing: Interestingly the comparison between Dictador 12 and Santa Teresa 1796 breaks down here. The rum doesn’t seem to do much for the cigars I’ve tried with it so far. I’ve only tried a half dozen at this point, but most were cigars on which the Santa Teresa has some enhancing effect. I didn’t really notice much in any of these pairings, but I will update this if I come across something that connects for me.

All in all I would have to say that this is a good rum as rums go even if it doesn’t seem to suit my palate as a cigar compliment. But good is not great. Dictador 12 year is about $45 around me as compared to an un-discounted $50 or so for the Santa Teresa. If I find this rum discounted below $40 I might get it again, but otherwise, there are too many other rums that are less expensive and do more for the cigars!